Slate is a long-lasting roofing system that can provide superior durability and add a distinctive touch of timeless beauty to your commercial property. Slate is been highly acclaimed for its natural beauty and remarkable longevity.

Roofing slate is a dense, durable, naturally occurring material that is essentially nonabsorbent. Two properties of slate are cleavage and fracture. It has natural cleavage, which permits it to be easily split in one direction. Fracture, usually occurring at right angles to the cleavage, is called the grain. Roofing slate commonly is split so the length of the slate runs in the direction of the grain. The surface texture of slate after being split for commercial use derives from the characteristics of the rock from which it was quarried. Some slate splits to a smooth, practically even surface, while other yields a surface that is rough and uneven.

The color of slate is determined by its chemical and mineral composition. Because these factors differ in various regions, roofing slate can be obtained in a variety of colors. In addition, exposure to weather causes slate to change color. The degree of change varies depending on the slate. Slate exhibiting minimal color change is known as “permanent” or “unfading” slate. Slate that shows a more marked color change is known as “weathering” slate. Between unfading slate and weathering is “semi weathering” slate.

There are several classifications for slate roof systems. The first is standard slate, which refers to slate that generally is from 3/16 inch (5 mm) to 1/4 inch (6 mm) thick with uniform length. The category “standard smooth” refers to standard slate that has a relatively smooth surface, in comparison with “standard rough” or just “rough”. Rough slate has a rougher texture and generally is available in thicker pieces. Finally, there is “graduated/textural slate,” which is designed with varying lengths and thicknesses and generally is rougher than standard slates. 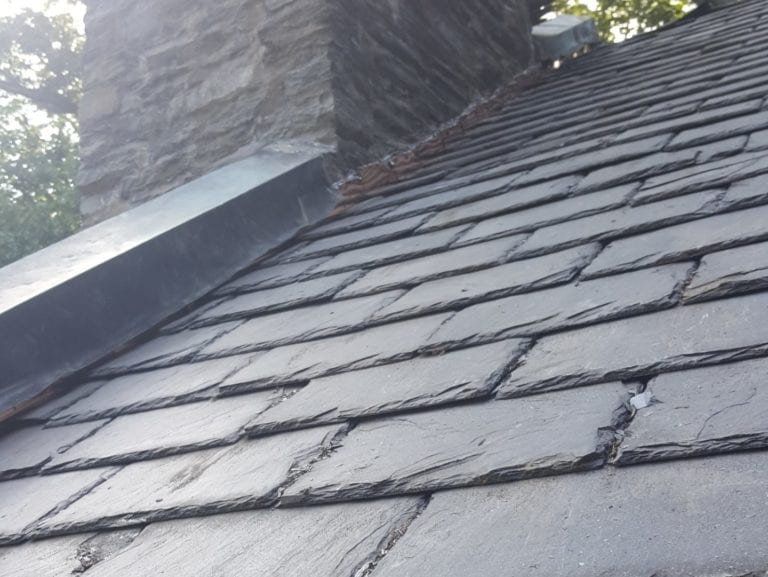 Have a question? Our fast, friendly team is here to help and provide whatever information you need.

Need a quote?  We’ve got you covered with free quotes for all roof repair and replacement needs. We’ll review your roof and create an effective solution to keep your valuable property safe and dry.